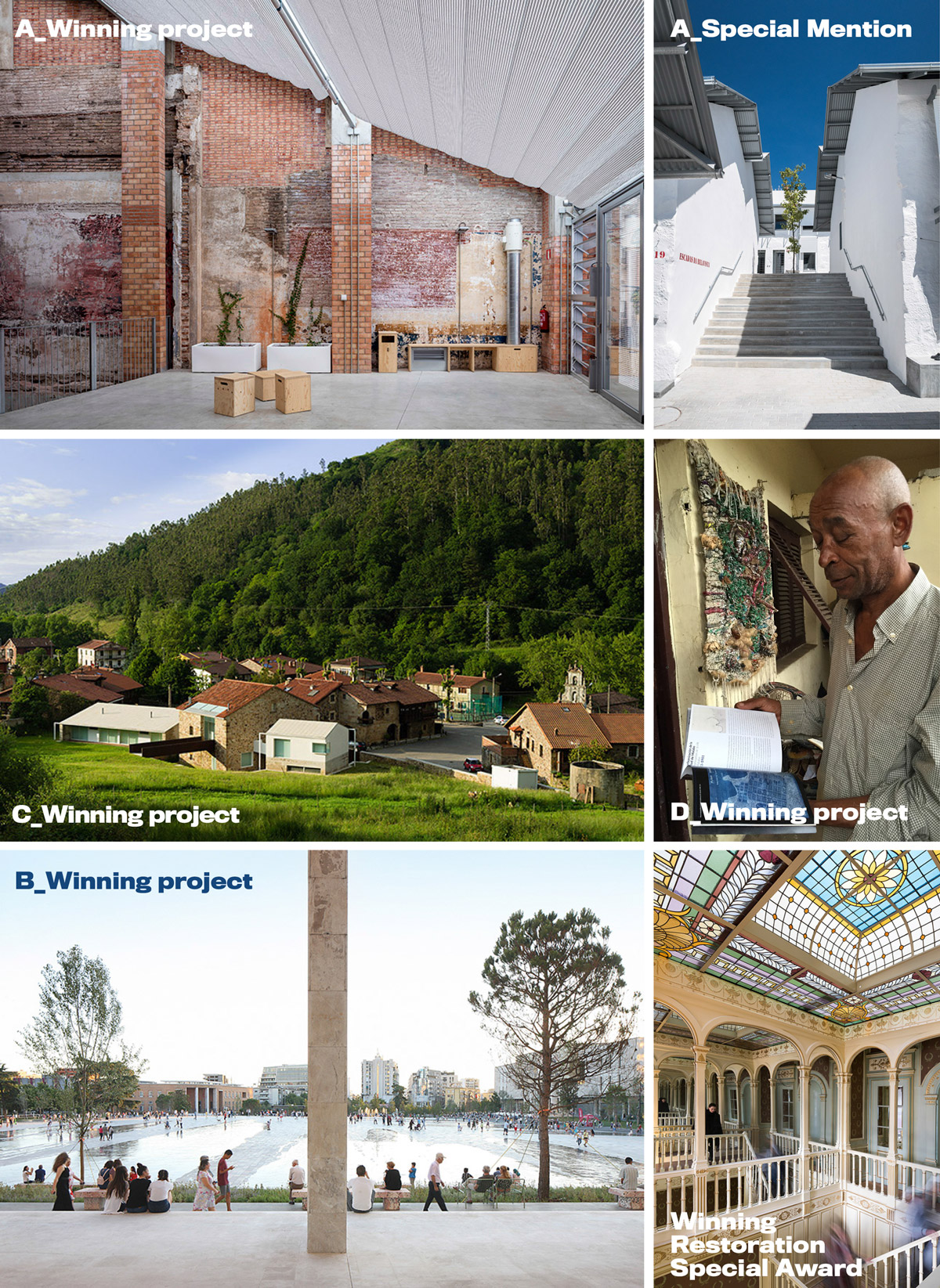 The reconversion of a landmark building in Barcelona (formerly home to a workers’ cooperative) for use by local residents; the renovation of a square that reflects the complex and diverse history of Albania; the urban renewal of a deprived neighbourhood in Porto; the recovery of a historical centre in Cantabria or an initiative that fosters built heritage as cultural capital both for the population of Equatorial Guinea and for tourism are among the winners of the 4th edition of the European Award for Architectural Heritage Intervention AADIPA . The jury, which has highlighted the success of these contemporary solutions in maintaining the original spirit of heritage, has selected 12 finalists, four winning projects, one special mention and one special restoration mention from a total of 239 works.

The European Award for Architectural Heritage Intervention AADIPA is a biennial award organised by the COAC (Association of Architects of Catalonia) and the AADIPA (Association of Architects for the Defence and Intervention in Architectural Heritage), sponsored by the Ministry of Culture of the Government of Catalonia and Barcelona City Council. This fourth award, with a record number of participants and from a wide variety of countries, is cementing its international reputation and renown.
The winners of the 4th European Award for Architectural Heritage Intervention AADIPA have been announced by the jury today at the COAC headquarters in Barcelona. The announcement of the 12 finalists, one special mention and five winning works was made during the 4th International Architectural Heritage Intervention Biennial AADIPA. The awards have been presented by the Right Honourable Maria Àngela Vilallonga Vives, Minister of Culture of the Government of Catalonia; Mr Marc-Aureli Santos, Director of Urban Architecture and Heritage of the Deputy Manager’s Office for Urban Planning of Barcelona City Council; Mr Gonçal Marqués Sagnier, Project Manager - Head of Operations of the Catalan Land Institute; Mr Antoni Vilanova, President of the AADIPA; and Ms Assumpció Puig, Dean of the Association of Architects of Catalonia.
Given the wide range of the submitted projects, the international jury of the award has wished to highlight not only the professionalism and architectural quality of the entries but also their capacity to demonstrate that a contemporary intervention can keep alive the original spirit and ambition of these elements in order to disseminate and boost architectural heritage.
In category A) Intervention in built heritage, the jury, in a first round of evaluations and taking into account the decision of the Award management to give visibility to a large number of works in this category and in category B, announced a list of 15 shortlisted works on 30 May, from which, following its final deliberation, it has selected four finalists, which are:
- Civic Centre Lleialtat Santsenca by H Arquitectes (Barcelona, Spain)
- Ilha da Bela Vista by Cerejeira Fontes Architects and LAHB (Porto, Portugal)
- Parliament of Canton Vaud by Bonell i Gil Arrquitectes and Atelier Cube (Lausanne, Switzerland)
- New access to the historical centre of Gironella by Carles Enrich Studio (Barcelona, Spain)
From among the four finalists, the jury has decided to give the Award to the Civic Centre Lleialtat Santsenca project by H Arquitectes. This decision is the result of attaching great value to the way in which the project maintains the original spirit of the building, a social place with memory, shown through the relationship between the spaces that house new uses framed within the history of the existing walls. A sensitive architecture built using low-budget solutions and committed to sustainability by means of powerful passive systems that structure the project. Furthermore, the jury has decided to give a special mention to the rehabilitation of dwellings in the deprived neighbourhood of Ilha da Bela Vista in Oporto, carried out by Cerejeira Fontes Architects and LAHB (Laboratory of Basic and Social Housing), due to its capacity to implement a programme and a sustainable project capable of transforming an urban area that needed an efficient and inclusive renewal.
In category B) Exterior Spaces, from among the ten works shortlisted by the jury, the following four finalists have been selected:
- Skanderbeg Square by 51N4E, Anri Sala, iRI and Plant en Houtgoed (Tirana, Albania)
- Visitor Center of Villers Abbey by Binario Architectes (Villers-la-Ville, Belgium)
- Access to Jorba Castle by Carles Enrich Studio (Barcelona, Spain)
-  Zollverein Park by Planergruppe GmbH Oberhausen (Essen, Germany)
In category B the jury has decided that the winning project is Skanderbeg Square in Tirana, by 51N4E, Anri Sala, iRI and Plant en Houtgoed, attaching special importance to the freedom exercised by the project authors in meeting the challenge of working on a site that is extremely complex and symbolic due to its key historical and political context. And due to the humbleness expressed through a subtle topography that reasserts to the same degree the value of the surrounding historical architectural complex and creates porosity with the setting, breaking with the composition of the established urban axis and generating a new model of urban space.

In Category C) Planning, the four finalists are:
- Historical centre of Liérganes and its surroundings by Carlos de Riaño Lozano, Carlos Ferrán Alfaro, Fernando Navazo Rivero, Carlos Ferrán Aranaz and Luis Herrero Fernández (Cantabria, Spain)
- Badaevskiy Brewery by Herzog & de Meuron (Moscow, Russia)
- Rec Comtal master plan by Carles Enrich Studio (Barcelona, Spain)
- In Natura Veritas by AGi Architects (Pontevedra, Spain)
In category C, the jury has decided that the winning project is the special protection and rehabilitation plan of the Historical centre of Liérganes and its surroundings, by Carlos Riaño Lozano, Carlos Ferrán Alfaro, Fernando Navazo Rivero, Carlos Ferrán Aranaz and Luis Herrero Fernández. In the jury’s view, the intervention is highly valuable for the recovery of day-to-day life, combating the phenomenon of the progressive abandonment of historical centres. The jury also highlights that this is a plan of practical application whose level of detail shows the authors’ extensive knowledge of the vernacular architecture and scenic values of the place.
In Category D) Dissemination, the four finalists are:
- Guinea Heritage 2020 by Montserrat Villaverde and Laida Memba Ikuga (Barcelona, Spain)
- National Network of Traditional Building Masters by Alejandro Garcia Hermida (Madrid, Spain)
- The conservation of the house as heritage, single-family houses of Alejandro de la Sota by Teresa Carrau Carbonell (Valencia, Spain)
- Valencia Historical Centre. Eight centuries of residential architecture by Camilla Mileto, Fernando Vegas and co-authors (Valencia, Spain)
The winning work is Guinea Heritage 2020, by Montserrat Villaverde and Laida Memba Ikuga. This project integrates and structures strategies of research, knowledge and dissemination, considering built heritage as cultural capital for the population of Equatorial Guinea and for tourism. The jury underlines the fact that a project which began life as a piece of academic research has had the capacity to grow, involving not only national and international experts but also social, artistic, educational and governmental agents, having a positive impact on civil society, involving communities and contributing to the essential recovery of heritage. A participative, multidisciplinary, integrated and replicable model, which exemplifies the capacity to return to society from the Academy.
This year, the Award management has incorporated the Special Restoration Mention, which from all the submitted entries goes to the intervention which, from a technical and methodological perspective, has stood out most for its quality, precision and respect. Having carefully analysed all the projects submitted in all the categories, many of which are of extremely high quality, the jury has unanimously decided to give the award to the Belgian studio Ma² Project for the Maison Saint Cyr in Brussels. This project stands out for the excellent work done in showcasing all the features of one of the city’s iconic buildings, enhancing not only its modernist characteristics but also its great wealth of spaces, thanks to the artisanal and restoration work defining its eclectic and historicist interiors.
From April 12, the closing date of the registration period, until the end of May, the international jury formed by renowned experts in the field of intervention in architectural heritage, have carried out the task of assessing the works that in each of the 4 categories will be considered for the award. In category A - Intervention in built heritage - architects Louis Leger, Marià Castelló and Leticia Soriano have evaluated 163 projects. On the other hand, in Category B -External Spaces- the experts Benoit Moritz, Elizabeth Abalo and Elena Albareda have been analyzing 34 proposals. In category C -Planning- professionals Chiara Nifosi, Javier Gallego and Joan Casadevall have evaluate d16 projects and in category D -Dissemination- Mariana Correia, José Manuel Chacón Bulnes and Anna Ramos have studied 26 works.
The 4th edition of The European Award for Architectural Heritage Intervention AADIPA, directed by Ramon Calonge, Oriol Cusidó, Marc Manzano and Jordi Portal; members of the Association of Architects for the Defence and Intervention in Architectural Heritage AADIPA, part of the COAC, with a record number of participants and from a wide variety of countries, confirms its reputation and its international notoriety.