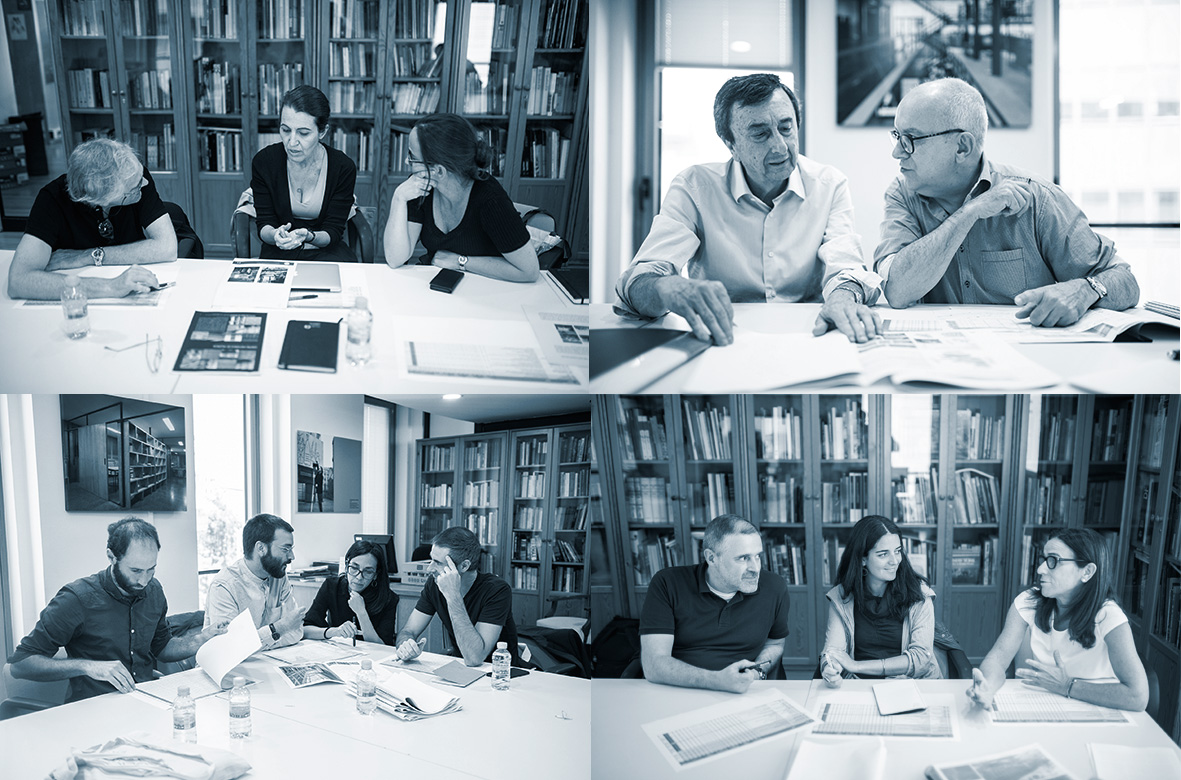 
Gathered here today at the headquarters of the Association of Architects of Catalonia (Plaça Nova, 5, Barcelona) are the juries of the four categories of the AADIPA European Award for Architectural Heritage Intervention, composed of the following members:

FINALISTS
In Category A (Intervention in Built Heritage), after carefully analysing and discussing the 15 shortlisted works, the jury has decided to declare the following four entries as finalists:
●      Lleialtat Santsenca Civic Centre by H Arquitectes (Barcelona, Spain)
●      Ilha da Bela Vista by Cerejeira Fontes Architects and LAHB (Porto, Portugal)
●      Parliament of Canton Vaud by Bonell i Gil Arrquitectes and Atelier Cube (Lausanne, Switzerland)
●      New access to the historical centre of Gironella by Carles Enrich Studio (Barcelona, Spain)
The jury places on record that the broad spectrum of projects has led to a long discussion on what comprises an intervention in architectural heritage nowadays and from a contemporary perspective. The selected projects have stood out for the way in which they improve and reclassify existing situations, not only demonstrating their quality from an architectural and project perspective but also making a remarkable effort to keep the spirit of the place alive. Despite the differences of scale, programme, etc., they all succeed in approaching existing buildings in an efficient manner from a contemporary perspective. Economy of means, simple materials, a programmatic approach and generosity constitute a common framework that has determined the selection of finalists.
In Category B (Exterior Spaces), after carefully analysing and discussing the ten shortlisted works, the jury has decided to declare the following four entries as finalists:
●      Plaza Skanderbeg de 51N4E, Anri Sala, iRI y Plant en Houtgoed (Tirana, Albania)
●      Visitor Centre of Villers Abbey by Binario Architectes (Villers-la-Ville, Belgium)
●      Access to Jorba Castle by Carles Enrich Studio (Barcelona, Spain)
●      Zollverein Park by Planergruppe GmbH Oberhausen (Essen, Germany)
The jury wishes to place on record the wide variety of scales and themes present in this category, ranging from cultural landscapes to small interventions in heritage settings. After a long discussion, the jury has wished to select a group of finalists faithful to this diversity of themes and programmes, selecting the entries that best fulfil the demands of each theme, always promoting aspects such as economy of means, the value of the local environment and the importance of sustainability.

In Category C (Planning), the following entries have been declared as finalists:
●      Historical centre of Liérganes and its surroundings by Carlos de Riaño Lozano, Carlos Ferrán Alfaro, Fernando Navazo Rivero, Carlos Ferrán Aranaz and Luis Herrero Fernández (Cantabria, Spain)
●      Redevelopment of the Badaevskiy Brewery, by Herzog & de Meuron (Moscow, Russia)
●      Rec Comtal master plan by Carles Enrich Studio (Barcelona, Spain)
●      In Natura Veritas by AGi Architects (Pontevedra, Spain)
The jury has praised the high level of the submitted entries, in terms of both concept and documentation. In selecting the finalists the jury members have wished to highlight some of the aspects that they consider to be important nowadays in works involving the protection and recovery of heritage on an urban and territorial scale. In this respect, the finalists’ entries offer an exemplary response in terms of the balance between protection and intervention, reversibility, the challenge of sustainability and renaturalisation, the importance of the social aspect and the need for a good analysis of pre-existing elements.

In Category D (Dissemination), the following finalists were chosen:
●      Guinea Heritage 2020 by Montserrat Villaverde and Laida Memba Ikuga (Barcelona, Spain)
●      National Network of Traditional Building Masters by Alejandro Garcia Hermida (Madrid, Spain)
●      The conservation of the house as heritage, single-family houses of Alejandro de la Sota by Teresa Carrau Carbonell (Valencia, Spain)
●      Historical centre of Valencia. Eight centuries of residential architecture by Camilla Mileto, Fernando Vegas and co-authors (Valencia, Spain)
The jury states that most of the works stand out for their quality and their ambition in terms of dissemination. It also wishes to highlight the difficulties of evaluating entries from such a broad spectrum. The winning works have been chosen for their methodological approach, for their rigour and for their capacity to open up new paths and broaden work spaces in the necessary field of dissemination.

WINNERS
Having selected the finalists, the jury hereby decides on the winner in each of the four categories of the Award. The jury of each category issues the following verdict:
In Category A the jury has decided to declare the following entry as the winner:

●      Lleialtat Santsenca Civic Centre by H Arquitectes (Barcelona, Spain)
The project maintains and enhances, in an exceptional manner, the original spirit of the building, a social place with memory, which is built through the relationship between the new spaces and the dialogue with the traces and patina of history, expressed sincerely and without artifice on the existing walls. A sensitive architecture built using low-budget solutions and committed to sustainability by means of powerful passive systems that structure the architectural heritage project.

The jury has unanimously decided to award a special mention to the following project:

●      Ilha da Bela Vista by Cerejeira Fontes Architects and LAHB (Porto, Portugal)
The jury has appreciated its capacity to renew the run-down urban fabric by means of a comprehensive and ambitious intervention that acts on a scale ranging from the city to the domestic environment. Through low-cost solutions, common elements in the dwelling are subtly defined, redefining a long-gone order and at the same time being conducive to an appropriation of public and private space.

In Category B the jury declares the following entry as the winner:

●      Plaza Skanderbeg de 51N4E, Anri Sala, iRI y Plant en Houtgoed (Tirana, Albania)
The jury has attached special importance to the quality of project freedom exercised in a very special historical and political context, breaking with the composition of the established urban axis and generating a new model of urban space. The humbleness expressed in a section that works with a subtle topography enhances to the same degree the value of the surrounding historical architectural complex. This section fosters the relationship with the urban environment while at the same time managing water by creating micro habitats of biodiversity, involving local residents in the selection of indigenous species. Special value has been attached to the integration of the social vector in the difficult work of the limits, both in the entrances to the historical buildings and in the porosity with the setting. The site’s symbolic value as one of the country’s main squares is enhanced though the use of stone from national quarries, thus fostering its appropriation as a citizen space. The members of the jury have expressed their admiration for the effort reflected by the project in successfully overcoming the challenge involved in working in such a complex and symbolic place.

In Category C the jury declares the following entry as the winner:

●      Historical centre of Liérganes and its surroundings by Carlos de Riaño Lozano, Carlos Ferrán Alfaro, Fernando Navazo Rivero, Carlos Ferrán Aranaz and Luis Herrero Fernández (Cantabria, Spain)
In the jury’s view, the special protection and rehabilitation plan of the historical centre of Liérganes is highly valuable for the recovery of day-to-day life, combating the phenomenon of the progressive abandonment of historical centres. The work fulfils the objectives of the category. The jury also highlights that this is a plan of practical application whose level of detail shows extensive knowledge of the vernacular architecture and scenic values of the place.

In Category D the jury declares the following entry as the winner:

The jury has wished to underline that the project began life as a piece of academic research has the capacity to grow, involving not only national and international experts but also social, artistic, educational and governmental agents, having a positive impact on civil society, involving communities and contributing to the essential recovery of heritage. It is a participative, multidisciplinary, integrated and replicable model, which exemplifies the capacity to return to society from the Academy.

The Award management has incorporated the Special Mention for Restoration, which from all the submitted entries goes to the intervention which, from a technical and methodological perspective, has stood out most for its quality, precision and respect.

●      Maison Saint Cyr by Ma² Project (Brussels, Belgium)
Having carefully analysed all the projects submitted in all the categories, many of which are of extremely high quality, the jury has unanimously decided to give the award to this project for the excellent work done in showcasing all the features of one of the city’s iconic buildings, enhancing not only its modernist architecture but also its great wealth of spaces, thanks to the artisanal and restoration work defining its eclectic and historicist interiors.

The deliberations having concluded at 20:30, the present minutes have been read out and unanimously approved. The persons present are thanked for their attendance and the session is ended.